Clementine Ford has finally been caught out in a case of defamation. She was forced to apologise to Ben Fordham after falsely accusing him of sexism for saying that women’s voices were “too annoying” for radio. Turns out that it wasn’t Ben who said this, it was Clementine herself!

As expected, many of Ford’s fans are calling Fordham a “man baby who had his feelings hurt” etc. How ironic when feminists have shown us how much they act like babies themselves when they don’t get their own way – eg Trump winning the election.

It was only after Fordham contacted Ford’s employer (Fairfax media) that she decided to make an “unequivocal apology”. It is thought that Fairfax media forced her to apologise, due to fear of being sued for defamation. Ford has since edited out the reference she made in relation to Bedham.

Here is her attempt at an apology on Facebook: 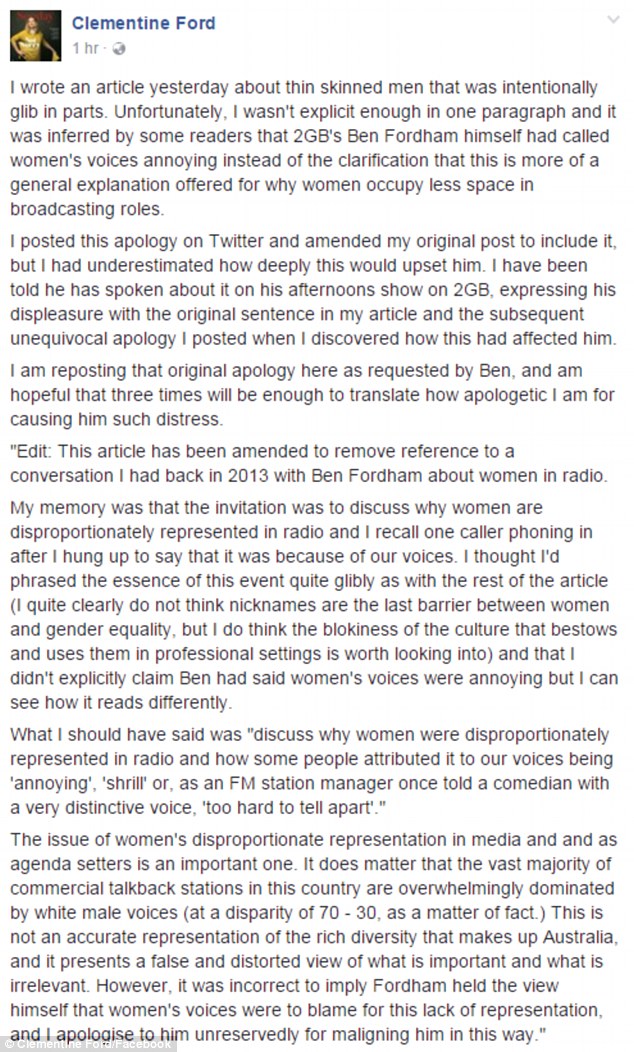 However it appears that Fordham is not completely satisfied with her apology and may additionally sue her for damages. You can listen to Fordham’s reponse here.

‘Up to 147,000 people would’ve seen the false story, and only a handful would discover the apology you’ve made today,’ Fordham said.

Mr Fordham, if you are reading this – please do us all a favour and sue her for defamation. This vile misandrist shouldn’t have a public voice in the media when all she does is bash men. She has had this coming for a long time now.

If Fordham sues for defamation, could this be the end of Clementine Ford? We can only hope!

You can read the full story here