Google trends shows a huge increase in MGTOW related searches over the past 3 years. This is particularly evident in the countries most affected by feminism such as Australia, Canada, USA, and UK. 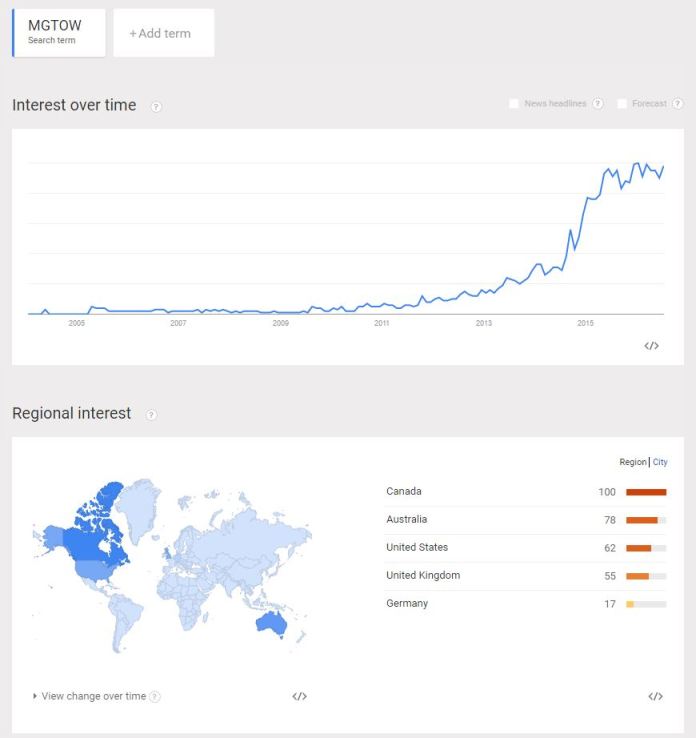 For those who aren’t familiar with the movement, MGTOW consists of 5 different levels. These range from MGTOW level 0 (Blue Pill) to MGTOW level 5 (Exile MGTOW) as shown below: 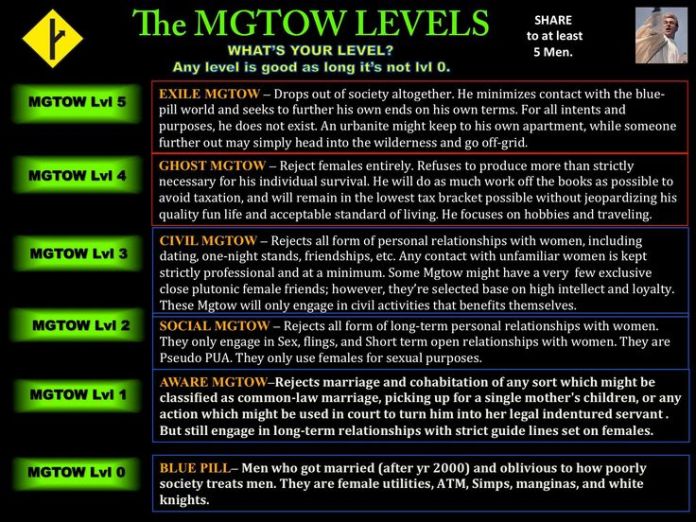 These days being raised in the 1st world with the programming of 3rd wave feminism the shock comes when the red pill is forced down your throat with the legal system and cry bullying.

When a man’s instincts are to:

More and more men are finding out the hard way that this is nothing more than a trap.

Modern feminism has manipulated the legal system to always be the “victim”.  Thus when she is finished, bored or just wants to cash in for the money and prizes she can pull out the “trump” card of Domestic Violence (DV). This then strips all rights to access your house, children and money with one swipe.

How many times have I heard “that will not happen to me, she loves me”? Too many!

My (and many others that study this) conclusion is simply put:

Going back not even 100 years men and women needed each other to survive. Financially the man would work and the woman would take care of the rest of the duties, operating as a team to bond. Now 3rd wave feminism shames women for not working and being “independent”.  Now the price for everything can double and now 2 people pay tax instead of one. Joint goals turn into separate rivalry. 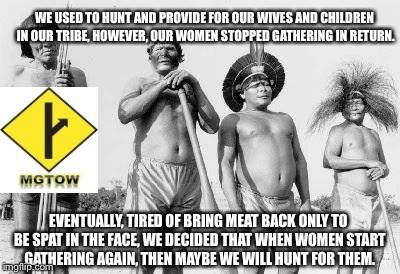 Our life expectancy has doubled so what genetically “getting married undo death us part” is 30 years longer.  Mundane life gets boring. Men are simple creatures so we can go to work, come home for a meal and sex, then like a content dog with a pat on the head we will continue the cycle. Women on the other hand always require something, which can be financial, mental or other to keep them stimulated.

70% of divorce in the 1st world is filed by the woman.

This all adds up to a “moment of clarity” a “red pill” moment when you realise that all your life you have been living to be the best role model only for it to be torn down. Suddenly you are poor as your wages get funnelled away by the government and you cannot see your children due to a restraining order. The government takes maximum percentage of your wage to “support the children” and “let her continue the lifestyle she was accustomed to” while you’re out on the street because you’re not allowed to go back to your house.

In 2012 an Australian study showed that out of 4500 men that committed suicide, 2000 of those had been through the family court. 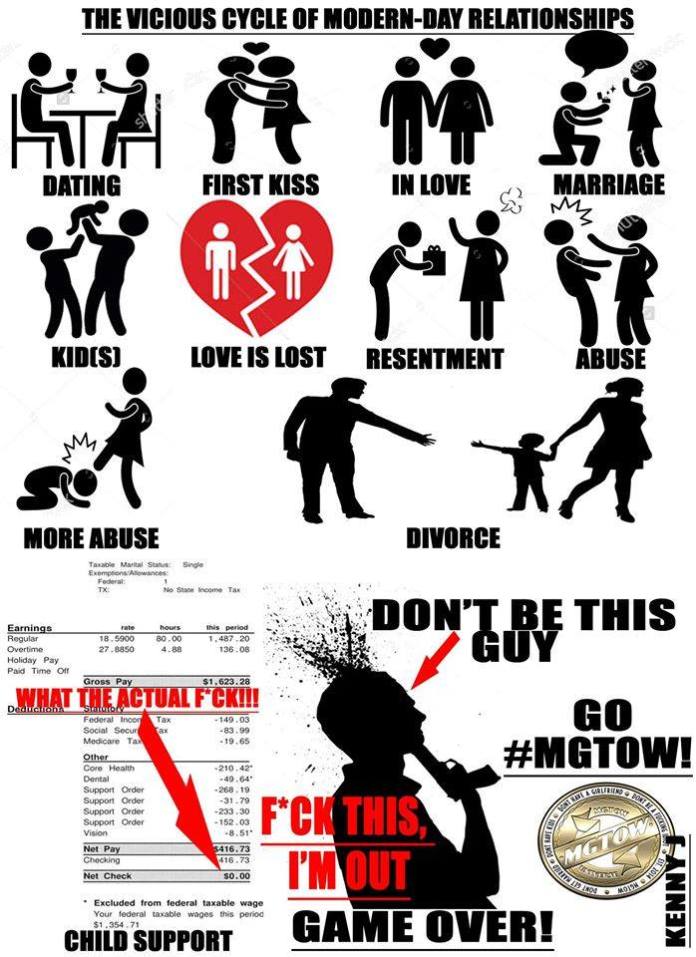 This is just one of the common scenarios that turn men into MGTOW. It is just a logical path to take when the system is stacked against you. You take yourself off the field of play and watch society from the grandstand.

Once a man realises he does not need validation from a female and the only thing most women have to bring to the table is a vagina, the bubble is busted.

Once a man realises he is in control of his time, money and goals he is unstoppable. The amount of women that pick up on this who cannot control their urge to interfere is amazing. The attention they lust after is lost on MGTOW and this confuses them. There are times where I’ve been watching bands and woman were flirting for the attention of men. When this happens to me I have never shown an interest. There was one time a woman grabbed my hand to dance with her.

“Stop, don’t touch me!” I had to say. She almost fainted from the rejection.

MGTOW’s only reach this way of life because the river only flows downhill.

Making men the draft horse to pull the load and flog with a whip only makes them want to jump the fence and walk alone in the forest.

Men are not “meal tickets”, “utilities provider” or a “bank” just to amuse women on the cock carousel.

More western men are getting smarter and washing their hands of the one sided system they have gambled with.