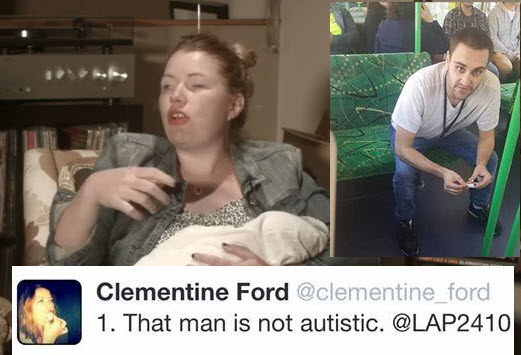 Many people have been angry about Clementine Ford bullying a disabled man on Facebook. After the news went viral, many have demanded that she makes a public apology to the man and his family.

Clementine Ford doesn’t seem to be backing down. She keeps making excuses for her disgusting behaviour towards this poor disabled man. She is trying to get away with it based on the technicality that he isn’t autistic. Perhaps he may not be autistic, but he is indeed mentally disabled. Should it even matter if he is autistic or mentally disabled? Well according to Clementine it does. Apparently this man is fair game for her misandric man bashing, because he’s mentally disabled (and not autistic).

Instead of making an apology, she keeps repeating “That man is not autistic“. 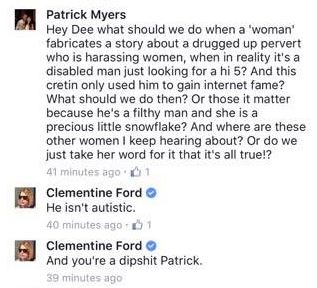 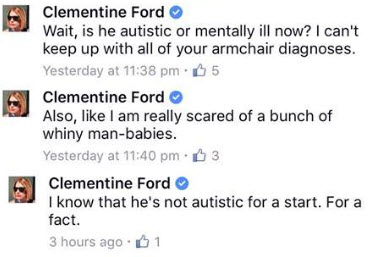 But it doesn’t end there. Instead of making an apology, she published an article on SMH to further try and excuse her shitty behaviour. She also used the opportunity for some good old man bashing about “harassing women”.

Shortly afterwards, unqualified rebuttals started appearing claiming this man had an intellectual disability. This was soon framed as him being autistic, with numerous people (who were not there) deciding this meant his behaviour was harmless and it was the nasty feminazis who were really at fault. Abusive comments (including the belief that she should have been raped and murdered by Adrian Bayley) were then hurled at the woman who wrote the original post.

Since then, the story has appeared on a handful of particularly vitriolic and paranoid men’s rights websites with the spurious claim of autism continually repeated. This is despite the fact none of these sites can actually provide the man’s name or indeed testimony from anyone other than untested ‘witnesses’ (who’ve done nothing to prove they were there).

Clementine claims she has spoken with his sister, but I call bullshit. If she did, why hasn’t she mentioned his name? Surely she would know it herself?

The man’s name is Ben. He is mentally disabled and has the intellectual capacity of an 8 year old. Since he’s technically not autistic that makes him fair game for some man bashing, right Clementine? 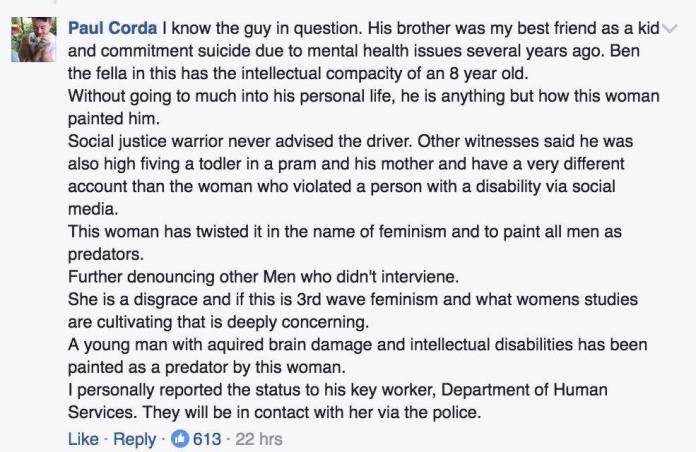 Many of us are tired of Clementine Ford’s disgusting, hateful behaviour towards men. I urge you all to make a complaint to her employer – Fairfax Media about her recent bullying of a disabled man. While you’re at it, also mention the hateful things she’s said about men previously.