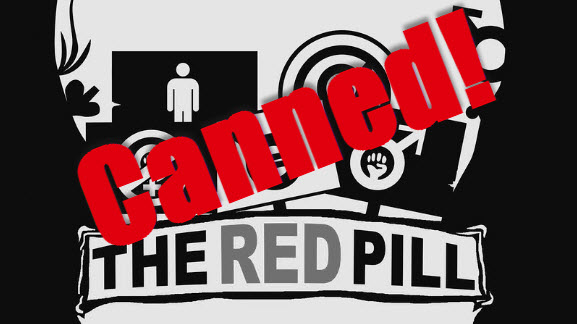 The Palace Cinemas in Melbourne have canned the movie “The Red Pill” after feminists created an online petition. The petition was started by “Susie Smith”, who claimed that the film would spread “misogynistic hate”.

The petition received 2,370 signatures after feminists spread it around on Facebook, including Clementine Ford’s page. Oh those poor female staff at the Palace Cinemas… apparently they would have had to “cope” with a whole bunch of MRAs. 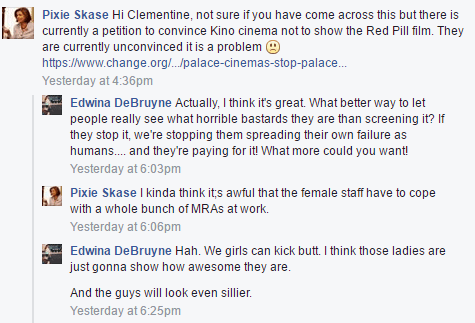 In response to the petition, MRAs created a counter petition, asking the Palace Cinemas to not can the movie.

“There are currently efforts being made by a feminist hate group in Melbourne to stop this film from showing, they don’t want people to see the truth and realize that feminists have been lying to push their agenda which is supremacy and domination.”

“We emplore that you let this film be shown to let people see that the only reason modern feminism exists is to make men second class citizens.”

Unfortunately it was too late, as the Palace Cinemas canned the movie shortly after. Feminists then rejoiced at their censorship “victory”. 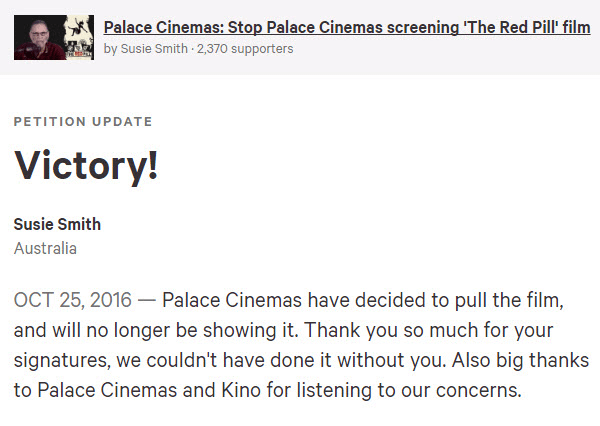 Organiser of the film David Williams, said nobody who signed the petition would have seen the film. He had expected controversy but was not prepared for so many “uninformed extremists”. Mr Williams is now seeking an alternative venue.

“I’m determined. I’ll find a way somehow, some way, some place to do this.”

“We support freedom of speech and reserve the right to allow private venue hire of our cinemas to a broad cross-section of groups, however at the time of the booking, we were unaware that this screening had the potential to cause distress to our valued clientele,” Ms Whiteway said.

Here is the full letter from Palace Cinemas:

This email is in regards to your booking at Kino Cinemas on Sunday 6th November, 2016.

Initially, at the time of accepting the booking, we were under the impression that this would be a closed, private screening advertised to your members. As this is advertised as a public event to which you are selling tickets, we have been made aware of the wider attention the screening has attracted. Additionally, we were unaware of the content of the film. Although we are yet to see it, we have since become aware of the controversial nature of the documentary.

You may be aware of the petition that is currently circulating on Change.org asking us to cancel the proposed screening of The Red Pill. The overwhelming number of responses, many fromregular Kino customers, has really resonated with us and has led us to reconsider the appropriateness of going ahead with the booking.

Much of the feedback that we have received assumes that the choice of film was our curatorial decision rather than that of the cinema hirer, which is potentially damaging to our credibility as we are yet to see the film so cannot stand by its contents in the face of the criticism we are receiving.

It’s unfortunate that it has come to this, however we have come to a decision based on the overwhelmingly negative response we have received from our valued customers. We cannot proceed with the booking at Kino Cinemas on Sunday 6th November.

Please consider this email as cancellation of the booking.

As we know, feminists always try to censor any speech that is a threat to their supremacist, man hating movement. They may think they have won for now, but ultimately they have lost.

The expression “any publicity is good publicity” certainly rings true here. Mr Williams has informed me that he has spoken to several journalists who will be publishing his story over the next few days. This will create free advertising which otherwise couldn’t be funded privately. It would seem that feminists have shot themselves in the foot over this one. By preventing this movie from being screened, it only further proves our point about feminism being a supremacist man hating movement.

Feminists have not won – the movie will be hosted at another venue and will be more popular than ever before. It is likely there will be even more sessions screened across different states in Australia.

I encourage you all to give the Palace Cinemas a one star review on their Facebook page.

Please also sign this petition to save the Red Pill Screening.

If you are able to help out with screening, see this page hosting a screening.

Spread this article far and wide!