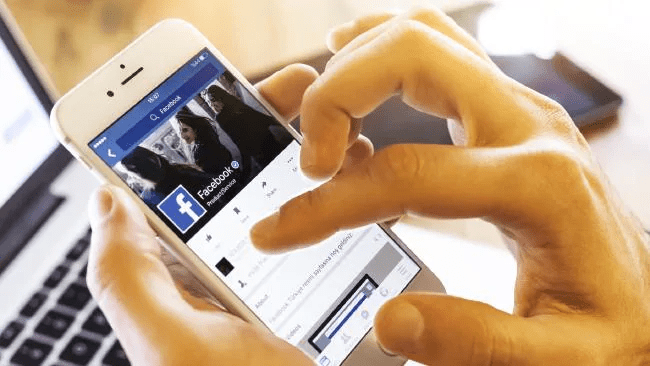 Feminists are known to use the reporting feature of Facebook to take down MRA and anti-feminist pages. This has gone on for several years in their attempt to silence freedom of speech and ban/silence those who disagree with their feminist ideaology. Groups of feminists (often in the thousands) group together and mass report certain pages. Anti-Feminism Australia page has been taken down at least 10 times over the years as a result of this. The worst was when we got to 70,000 likes before being banned.

The two biggest groups responsible for these mass reporting are those from Clementine Ford’s page and Sherele Moody’s The Red Heart Campaign. It has been the latter that was responsible for taking down our page lately.

In such cases, a hard-line approach is needed. Therefore, we have decided to take another approach. We take their weapon (big daddy Facebook) and turn it back against themselves. This means mass reporting their pages, posts, and comments for hate speech against men. And trust me, there is a lot of it on these two pages in particular. It seems this strategy of giving them a taste of their own medicine works better than attempting to reason with them.

In previous years, it was extremely difficult to get any posts or comments of misandry removed on Facebook. However in the past few months many of us have been having great success getting them removed. After several reports of feminists being banned, it would seem that Facebook recently changed their algorithms to also ban feminists who use hate speech against men.

Just recently we had a great streak of getting several feminists banned, including Sherele Moody herself! 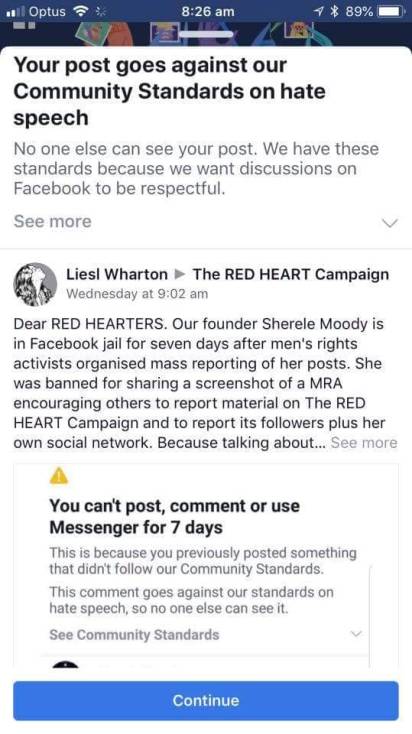 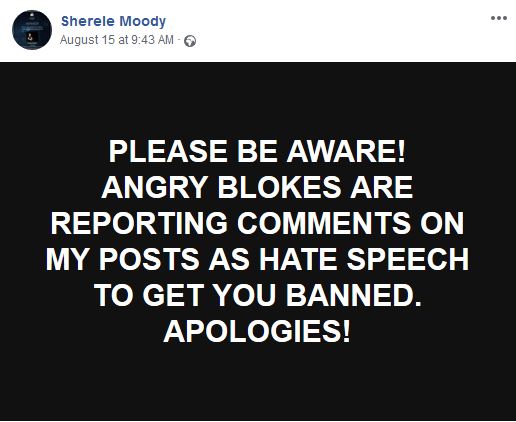 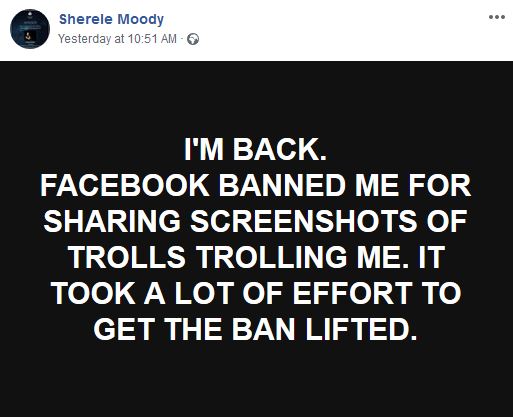 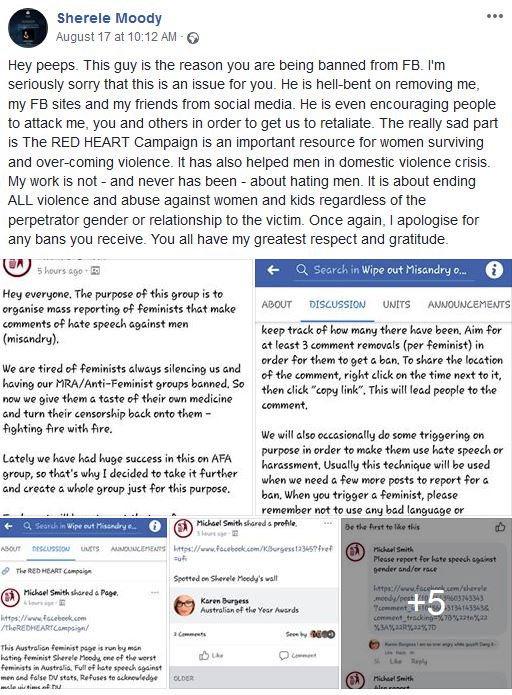 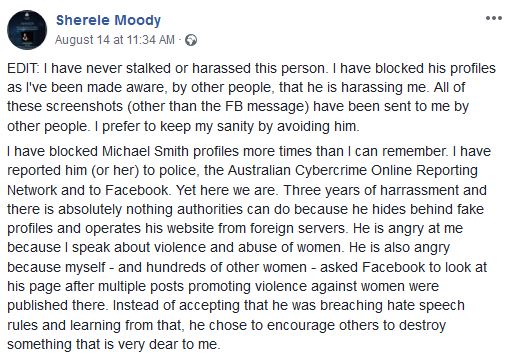 Her solution to avoid her cronies being banned for their vile misandry? To block all of us reporting them so we can’t see what vile filth about men they keep posting! It’s almost as if she knows what they are doing is wrong but wants them to get away with continuing to do it. If they were so innocent, why does Facebook remove their comments?

I find it hilarious that she has reported me to the police and Australian Cybercrime Reporting Network. For what exactly? Exposing her misandry and hatred of men? Or maybe it was for quoting facts about male victims of DV on her page? I’m sure the coppers had a good laugh over that one. They should have charged her for wasting police time and resources. The only such “stalking” i’m guilty of is checking her public profile and the Red Heart Campaign Page. Oh no, lock me up! Meanwhile she is constantly checking every post I ever make on Facebook, despite her claims for not doing so.

But here’s the real kicker. I love it how she says there is a “loophole” that allows us to get feminists banned who spew vile hate speech against men. In her twisted mind it’s called a “loophole” because it shouldn’t be possible for feminists to be banned for spewing any sort of vile misandry. In other words, she only wants men to be banned for comments of misogyny, but women free to spew all the vile misandry they want. 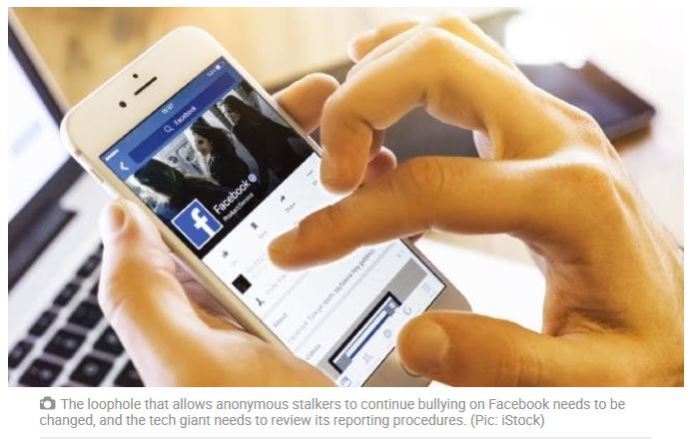 When they can see what it’s like to be censored and banned, they might finally start to realise the double edge sword of their big daddy Facebook. Remember, to feminists the only good censorship is censorship against those who disagree with their ideology. When their own weapon of censorship is used against themselves, they cry foul. Why is this good long term? Because it means they will complain to Facebook for not allowing freedom of speech. Since Facebook always listen to the concerns of women, they may then decide to change their hard-line censorship policy and allow pages like ours to exist.

This is why I encourage every person against misandry to report every single page, post, and comments you see made by feminists. If possible spend hours per day doing this. Do not be discouraged if you don’t have any success at first. We have noticed that successful deletions of misandry tend to come in streaks, likewise for those that fail. It seems to largely depend on the Facebook admin that is on duty at the time. In other words, it comes down to luck if you get a Facebook admin who is an egalitarian as opposed to a feminist. At times we have had successful deletion after deletion, while other times zero deletions.

Remember to first report the page, then the post, then the comments. In order of difficulty for removal the page is the hardest, and comments being the easiest. Facebook seem to come down hard on anything remotely with nudity, so if you see a feminist share a photo of something that even shows a bit too much skin, report it. Otherwise, almost every other post/comment should be reported as hate speech against gender. After a few post deletions from a page, the page will often be unpublished and require an appeal. This is why its often more successful to report the posts themselves rather than the page. However please note that it is believed Clementine Ford’s page is on a ban exemption list, so it may not be worth the time or effort to report her page/posts. Focus on individual comments from feminists there instead.

In regards to comments, report anything along the lines that mentions the word “men”, eg “men are X” for example. This seems to be the most effective in Facebook’s algorithms. Another effective report method is against race, for example a feminist makes a comment along the lines of “white men …… “. Remember, after a few deletion of comments, the person gets a ban. Since comments are the easiest to get deleted, its a very effective way of getting many feminists banned. Try and focus on a particular feminist by searching for all misandric comments she’s made and report them all. This will increase your chances in getting her banned. The two pages to focus on that often have a lot of misandric comments are Clementine Ford, The Red Heart Campaign, and Sherele Moody’s profile itself (since its public).

Finally, report the actual profiles of the feminist themselves as being fake. Many feminists are indeed using fake profiles to either hide or get around bans. Even if you aren’t sure the profile is fake, report it anyway. What does this do? It forces them to upload ID to prove its them. If they cannot upload any then its bye bye profile. We recently discovered Sherele’s fake profile that she used to get around her 7 day ban and reported it as well.

As mentioned, feminists from both the red heart campaign page and Clementine ford’s page have got our page banned at least 10 times. We never forget and we will never give up until we get revenge by giving them a taste of their own medicine. Feminists will pay the price for their actions.

We believe in freedom of speech but clearly you don’t. We have tried to reason with you but you refuse to play fair. So don’t expect us to play fair any longer either. Enjoy your bans, just like you’ve been doing to us all these years.

Just remember you feminists started this war, so we will be the ones to finish it.

To summarise, here are some tips that are found to be most effective in getting their posts removed, resulting in bans.

Hundreds of reports are flooding in and feminists are getting banned left right and centre. 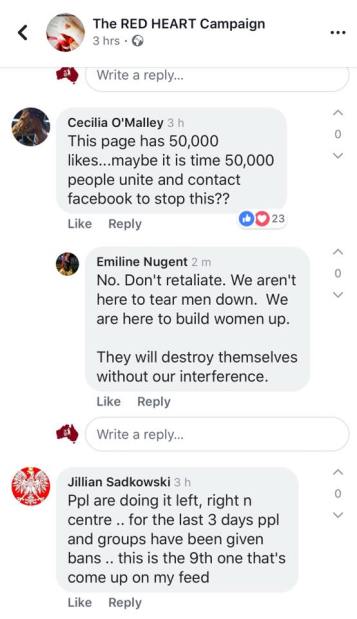 Sherele Moody and her cronies are pissed and can’t believe that their posts are being deleted for hate speech against men. How dare Facebook ban feminists for such vile hate speech against men! That’s right, she’s upset that comments such as “eradicating males becomes strangely more appealing” and “men need to have a curfew… They are clearly not able to control themselves” are being deleted. 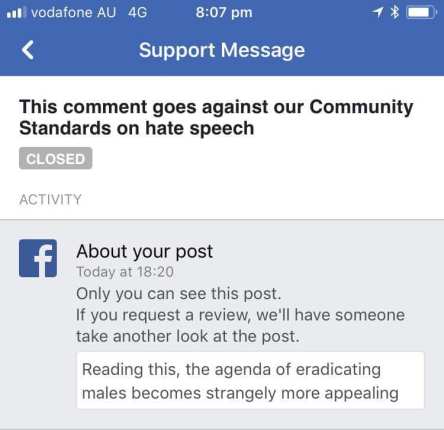 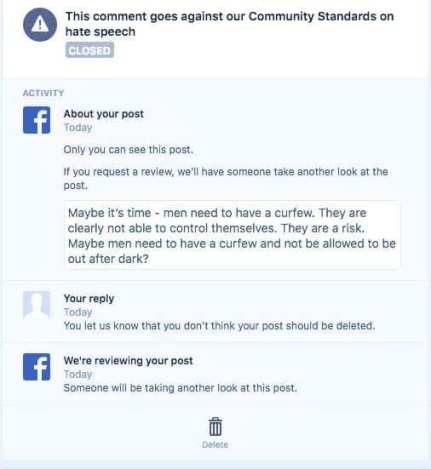 Some feminists feel so victimised that they suggest legal advice. Others are saying they aren’t liking Facebook anymore since they have got a taste of their own medicine. 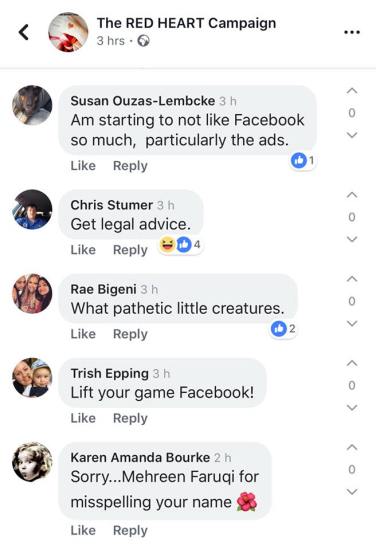 This feminist is upset that her feminist friend got a ban for posting a racist comment saying “white trash”. In their twisted mind, such comments are not considered “racist” because you can’t be racist against white people apparently. 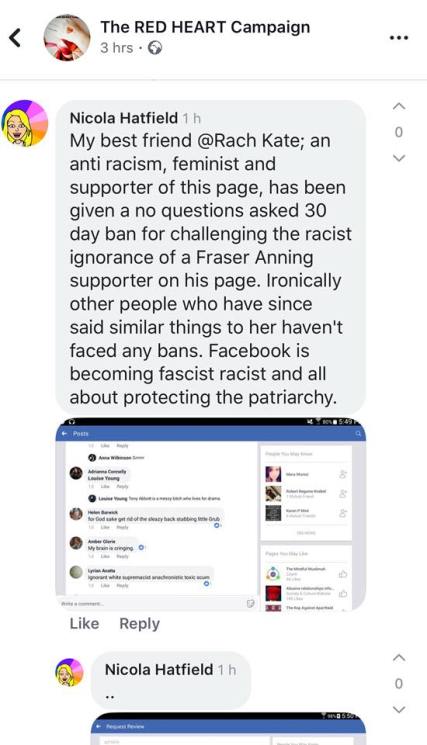 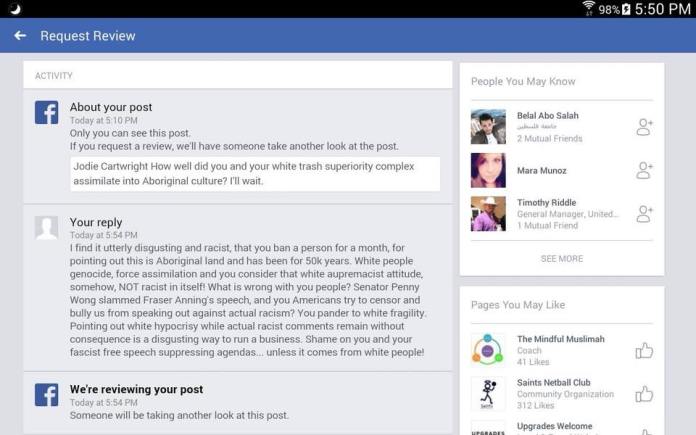