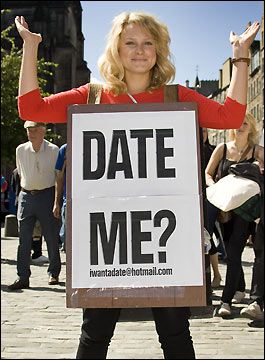 Women still expect men to approach them and make all the moves. When you ask women why the man should do the approaching, they respond with various excuses. Some examples are “I’m a traditional woman” or “I’m too shy” or “I’m afraid of rejection”. Some women falsely believe that men prefer to do the chasing and don’t like being asked out. Numerous polls (including those on Anti-Feminism Australia Facebook Group) and surveys have proven that this is a myth. It is just another convenient excuse women use to not have to ask a man out.

Ironically, women who say “I’m a traditional woman” usually don’t want to live the traditional way of a woman from the 1950’s. If she really was “traditional” then it would mean she’s happy to be at home raising kids, looking after her husband, and being a good house wife. Of course, she has no intention of doing any of this. Therefore many women like to play this “tradition” card when it suits them. 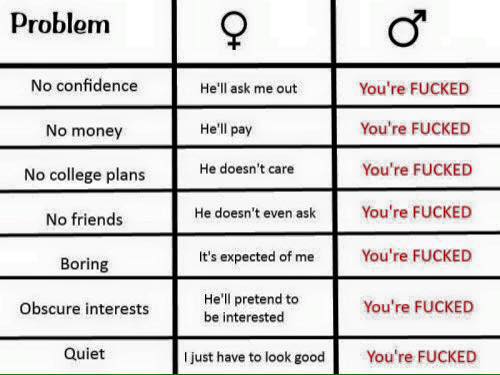 Those women who claim they are “too shy” or “afraid of rejection” either lack empathy for men or think they don’t have a problem with rejection. A shy woman is normally no issue to a man, while a shy man is normally seen as unattractive to most women. So if you’re a shy woman, no problem. However if you’re a shy man, then you’re screwed. Do women who say they are “afraid of rejection” think men don’t fear it? Perhaps this may be true for the top 10% of men that rarely get rejected. However for the 90% of us, we fear rejection a lot. Besides, why does a woman even need to fear rejection, when she has a much higher chance rate of a man saying yes?

You often hear feminists saying that “men can’t handle rejection” so they get angry or lash out. But can you really blame those men? They probably just got rejected for the 100th time because they weren’t in the top 10% of men that women go after. That is, men who are muscular, tall, and rich. 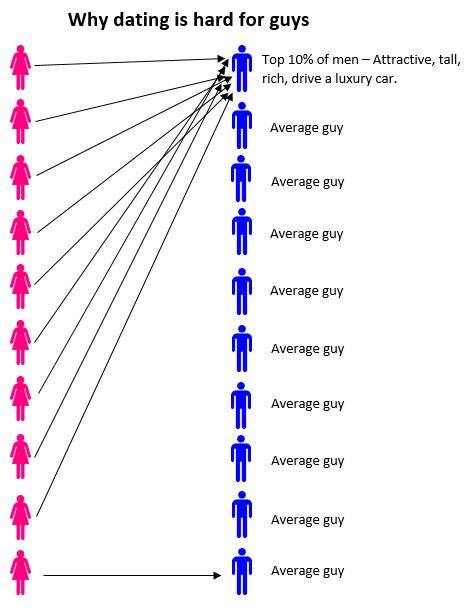 I’m sure if women were rejected over and over so many times, they too would become angry. In fact, it only takes a woman to be rejected once and often she’ll completely lose her shit. Australian women are rarely rejected, so on the rare occasion that they are, they don’t know how to handle it. I’ve seen women react much worse than men when they were rejected in the nicest way possible. 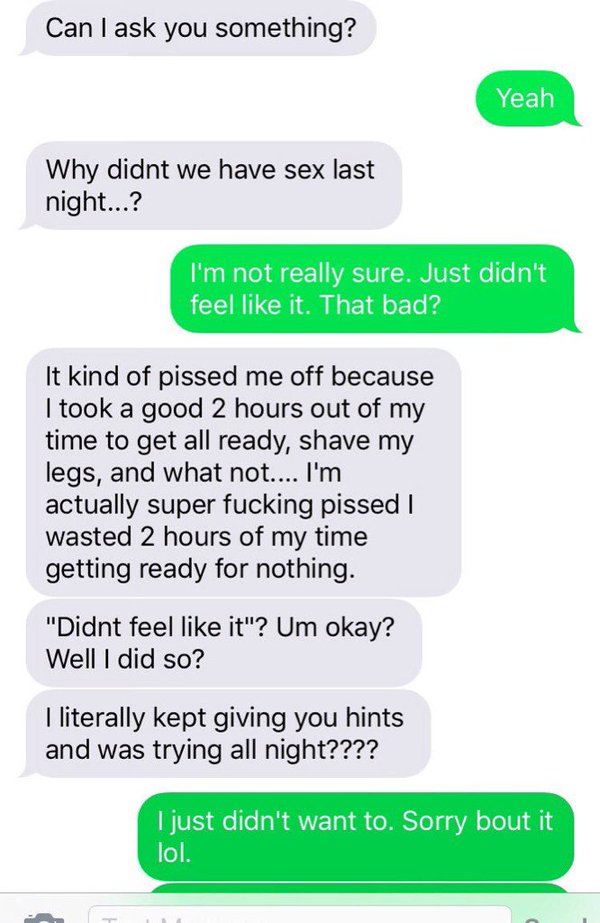 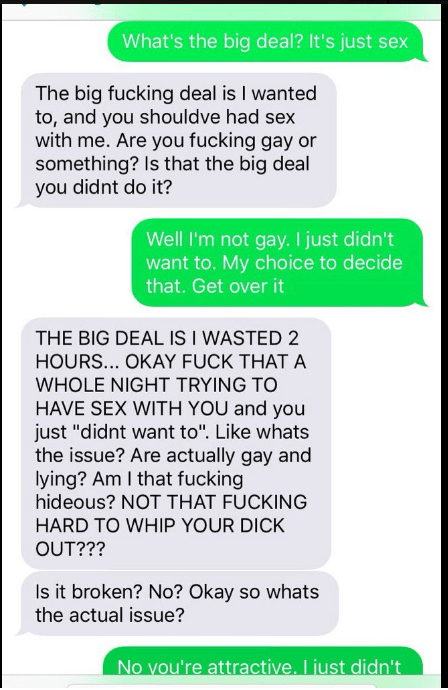 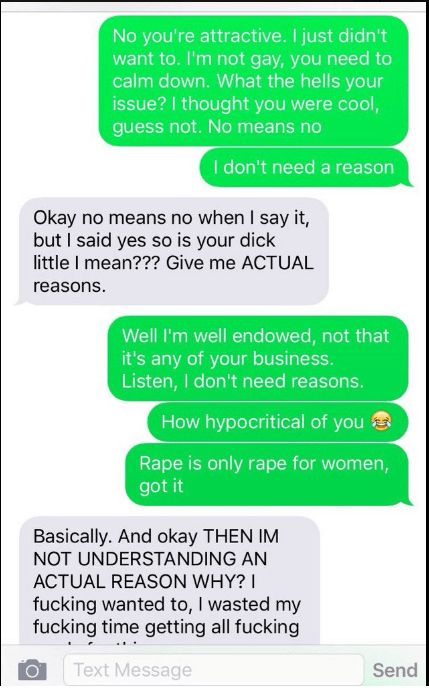 In the online dating world, this dating inequality is even worse. Women have thousands of options available to them, so they are even less likely to ever initiate any messages. As a consequence, the online world allows women to truly exercise their hypergamous nature. As we saw in a famous OkCupid experiment, women get flooded with messages from guys, while men are lucky to get any. All these messages mean it is even less likely for a woman to respond to a man, unless he is in the top 10%. 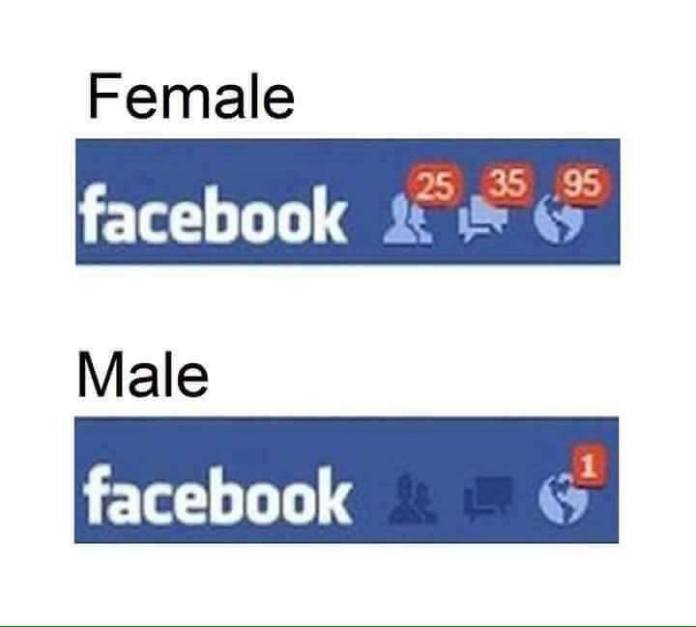 Women know that they hold a lot of power over men when it comes to sex and dating. This power is so great, that even many self proclaimed anti-feminist women won’t even give it up for equality. I have always maintained the one issue that separates the real anti-feminist women from the rest is dating inequality. If a woman refuses to give up some of her sexual power to make things easier on men, then she’s no better than a feminist.

I have lost count at the number of times so called “anti-feminist women” in the Anti-Feminism Australia Facebook Group have been triggered at the suggestion of women giving up some of this power. These women are quite happy to support all other issues except this one. Why? because this is the only issue that personally affects them, and to a huge degree.

The women who are triggered by this dating inequality will often say “oh its not a big deal” and “there are far more important issues to discuss”. It’s almost as if they cherry pick the inequalities that they want to support! The dating inequality that men face is no trivial issue. Rejection after rejection leads to a low self esteem, which leads to depression/loneliness, which can often lead to suicide. Isn’t it ironic, that these women are happy to address the male suicide epidemic, but don’t want to address one of the major reasons behind it.

It wasn’t only women who were triggered by this issue. A few men commented saying things like “that’s ridiculous, I can get dates/sex easily” and “you just hate women” and “you’re just upset because you can’t get laid” etc. These white knights would then defend these women who claimed that the dating inequality was “not a big deal”. The men who made these comments were obviously in the top 10% of men that women go after. As a result, they found it much easier to get dates and/or sex. They projected their own success of dating onto the other 90% of men who are invisible/ignored by women.

From the age of puberty, girls start to realise the sexual power they hold over boys. They start noticing that boys want them, and that they will do anything to get them. It isn’t long before women learn to use this power to get whatever they want in life. Not only is this used in dating and sex, it’s used to get out of any undesirable consequences. Everything from speeding fines to murder. This is where the term “pussy pass” originates from. You can now start to see why very few women are willing to give up this sexual power/privilege, even if they want true equality. 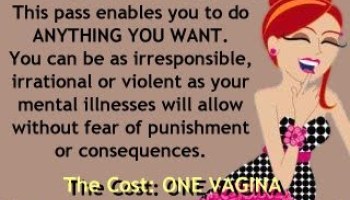 So here’s the thing. Feminists demanded that men give up some of their social and political power, so why didn’t they give up some of their sexual power in return? Because as we all know, feminism has nothing to do with equality. Feminism is a man hating, female supremacist movement. If feminism was about true equality, feminists would have also demanded women to give up the sexual power that they hold over men. They would have told women to start approaching men and also face rejection. They would have told women to stop using sex appeal to get what they want, or to get out of undesirable consequences. But of course they didn’t, because feminism was never about true equality.

Not only do most women refuse to approach men, they are far, far pickier than men are when it comes to choosing a mate. In countries like Australia, most women will only ever “date up” out of their league. For example, a woman who is considered a 6 out of 10 will only ever consider dating men who are at least an 8 out of 10.

On the flip side, this means Aussie men have to “date down” and settle for a partner who is below their league. Thanks to feminism, most Aussie women grew up with a sense of self entitlement. They believe that they deserve the very best of everything, including men. This is why we have women “dating up” and men being forced to “date down”. As you would expect, this pickiness results in more men being rejected.

So what is the solution to this dating inequality? The solution is for women to give up some of the sexual power/advantage that they hold over men. Women need to be taught to approach men and ask them on a date. For this to happen, we need to convince women it is beneficial for them to do so.

A study on OkCupid dating site revealed that women are 2.5 times more likely to get a response than men are if they initiate. How often do you hear women complaining of “douchbags” sending them dick pics or sexual messages? Perhaps if women were to send messages to guys that had similar interests/personality, they would find they have a much higher success rate. Yet despite knowing this, many women still refuse to initiate, and would rather sift through hundreds of undesirable messages. Sure enough, they will then whinge about “where are all the good men?” and “all men want is sex”. 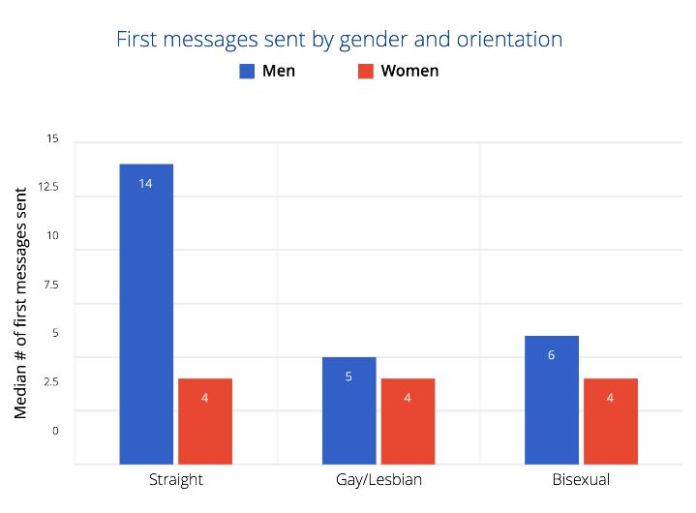 Women also need to stop being so picky and only date within their league. This means if they’re a 6, then they should only be dating men who are a 6 as well. This would resolve the issue of women only going after the top 10% of men who are way out of their league. As a result, the remaining 90% of men would find it easier to get dates.

As much as we can hope, i’m doubtful this dating inequality will ever be resolved. Women know the greatest power/privilege they hold is sex appeal. Very few women, (even some anti-feminist women) are willing to give this up in the name of equality. Therefore it would seem that the only short term solution for men is to date foreign women who are far less picky and self entitled. 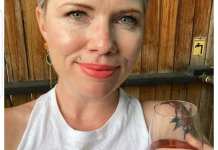 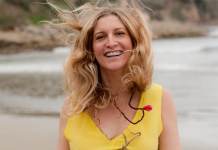 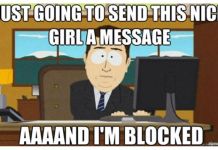 Woman abuses man after he refuses to have sex with her

Feminist sends men pics of her vagina to teach them a...