Many of you may not have heard the name Sherele Moody before. Why? because she hides behind the cover of her page “The Red Heart Campaign“. Sherele is easily one of Australia’s worst misandrists. Not only does she spread false information and stats on her page about domestic violence, she also openly hates men. It seems our old friend Clementine Ford might have some competition now. Why is it that the worst feminists are always from Australia?

It all started when we shared a poll on our Facebook page recently. The poll asked the question “If a woman hits you, would you hit her back?” Naturally we were referring to self defence if a woman were to hit you first. However Sherele Moody got triggered by this and accused us of promoting violence against women. It seems she had difficulty reading the question. Surprising for a so called “journalist”.

Sherele Moody seems to have an unhealthy obsession in posting about the female lives lost as a result of domestic violence in Australia. She keeps a tally of this throughout the year and then declares that Australian men are “evil” because look at all the women they have killed. Naturally, she fails to mention the men who have lost their lives from the hands of a female partner in cases of domestic violence. Not only this, but she also fails to mention the lives of children lost from the hands of a woman. Quite surprising, when Moody was a victim of child abuse herself from her own mother.

How does she respond when someone factually challenges her on this? She responses with abusive slurs such as “fuck off”. This is classic feminist behaviour when they have no argument, as we have seen from Clementine Ford. Charming stuff from a so called “journalist”. 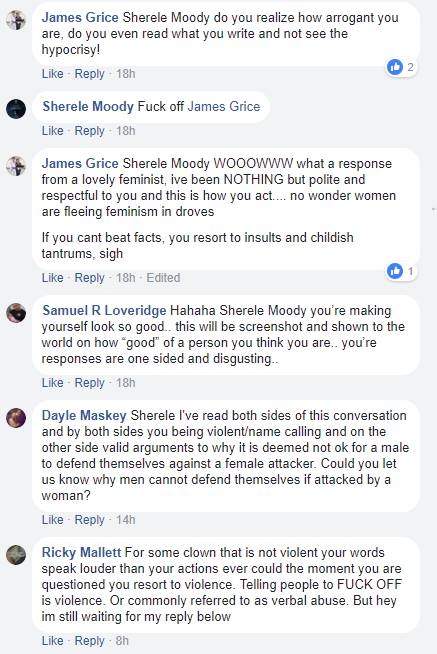 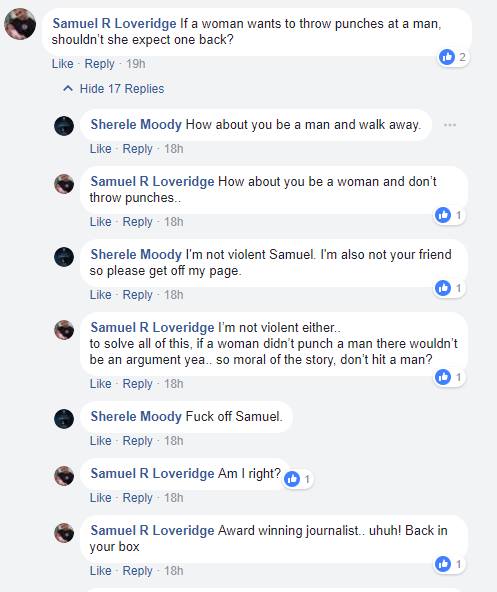 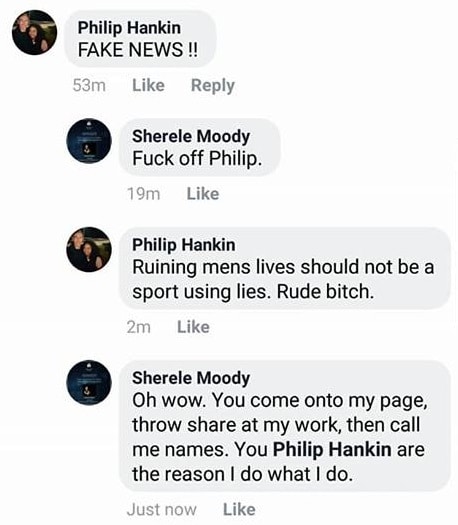 Interestingly, Moody then deleted all these posts showing her vile, abusive name calling. I wonder why? Perhaps she was afraid of her reputation as a journalist being ruined? Doesn’t look good for a journalist to be telling those who disagree with you to “fuck off” does it? It’s a good thing we managed to get the screenshots!

Sherele Moody and her cronies on The Red Heart Campaign are responsible for bringing down the Anti-Feminism Australia page, which reached 14,000 likes this time (our record was 70,000). Many feminists mass reported our page, which resulted in it being removed from Facebook. All this over a poll that hurt their feelings because they don’t like men using self defence against a woman who attacks them! 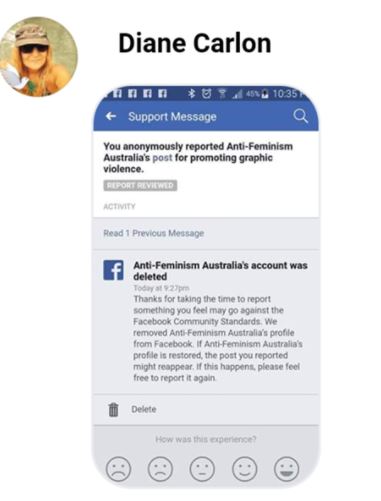 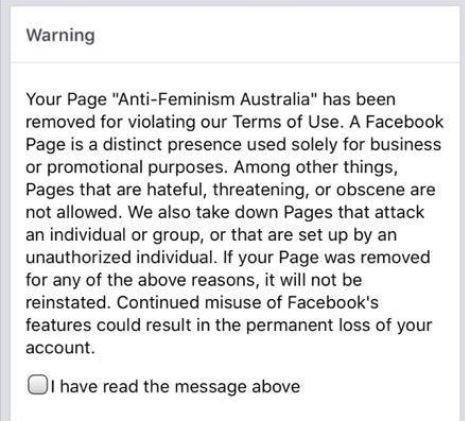 If you take a look at the cancerous comments from other feminists on the Red Heart Page, you’ll see typical examples such as this. Funny how she doesn’t seem to delete those comments. 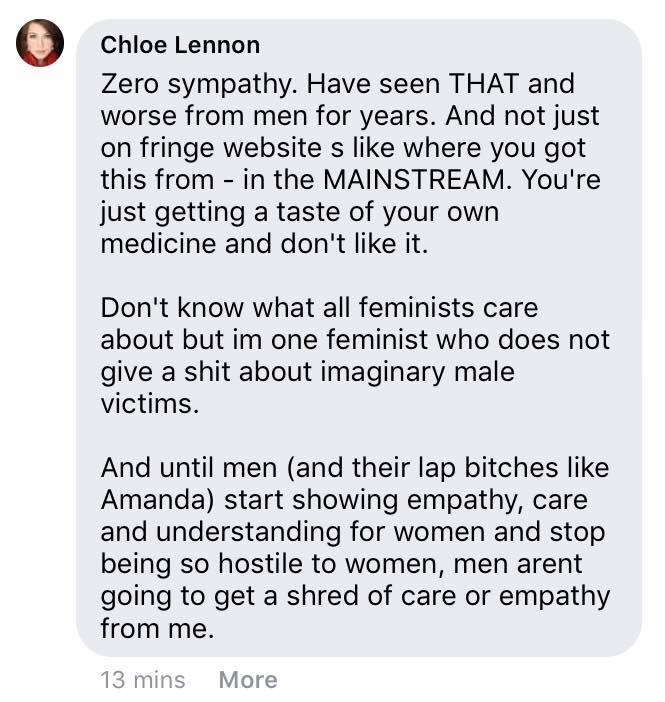 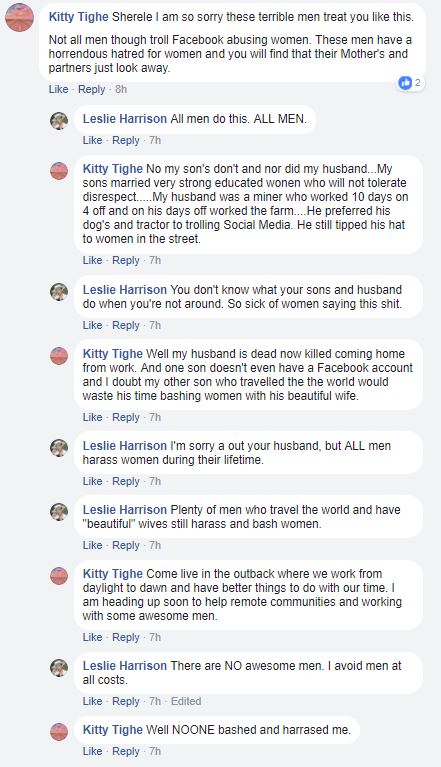 Naturally, she soon gloated about her “victory” on her page. 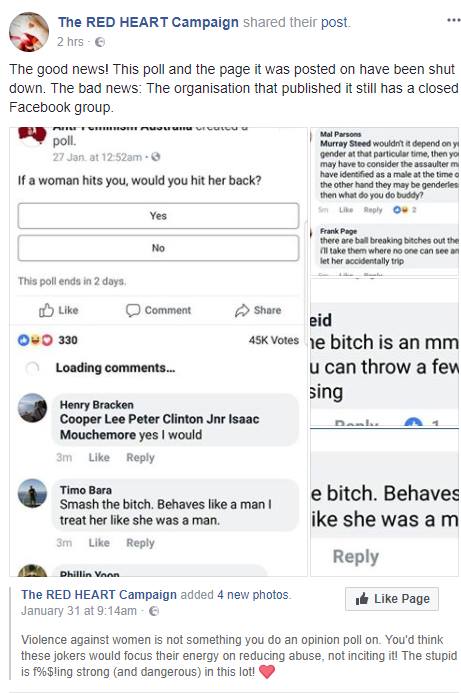 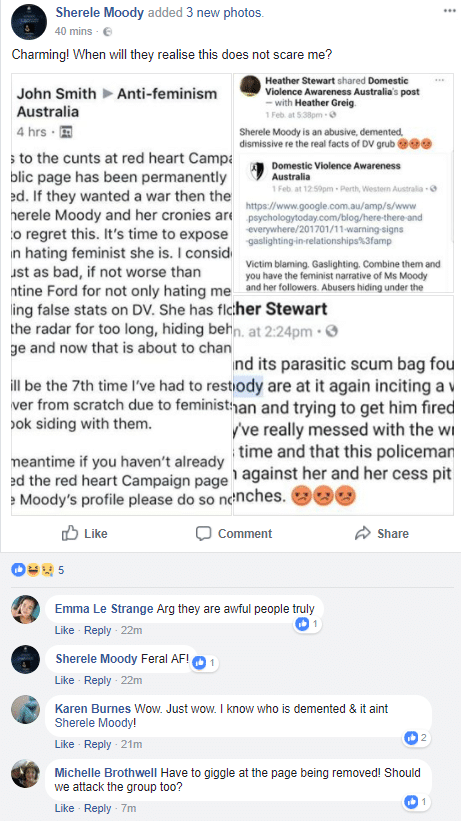 Sherele Moody writes for the Sunshine Coast Daily newspaper, owned by newscorp. Like Clementine Ford, it is disgusting that such a misandrist could be given a platform to spread such hate and false information. I wonder if her employer knows her abusive behaviour on Facebook? Why not contact them and let them know?

Amusingly, she contacted me to let me know that she’s writing a story about this in the paper. As always, we never respond to  feminist journalists, because they always twist our words in the Australian media to suit their narrative. We all know that the Australian media is run by man hating feminists such as Sherele Moody and Clementine Ford. What else would they do with their gender studies or arts degree? 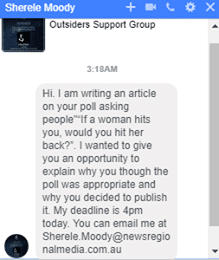 So there you have it, one of Australia’s worst misandrists who hates men and censors anyone who factually opposes false statistics. I never thought we could ever find another feminist that could top Clementine Ford, but it seems we may have found one. Sadly, Australia is home to some of the worst feminists in the world.

Sherele Moody has published an article in the “Queensland Times” paper attacking our group for the poll which asked “if a woman hits you, would you hit her back?”.

She also goes on to mention that only women are entitled to self defence, and claims that this is how men are murdered. Also more lies about the stats of male victims of DV as per usual.

“The owner of this particular MRA group did not respond to a request for comment, but has long proclaimed: “domestic violence is not a gendered issue”.

This is despite all the reputable data clearly showing that, yes, it is a gendered issue because women are the primary victims of violence at the hands of a current or former partner and  men are the primary perpetrators of this violence.

That said, men do experience intimate partner abuse, but it is more likely to be emotional and when they do die in domestic violence situations, their killers are usually other male family members or female partners who have used self-defence as a last resort.”

Looks like we’ve triggered her over this article! Funny how she thinks she can cover up any evidence of her abusive language and comments. The “ethical journalist” part had me in stitches. She wanted a war, so now she’s got it. 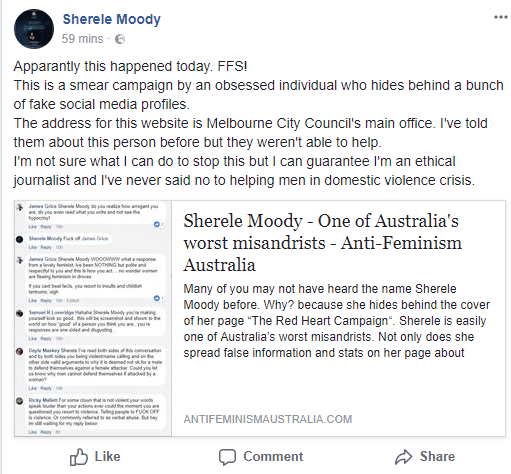 Bill’s story : trying to get help as a male victim...