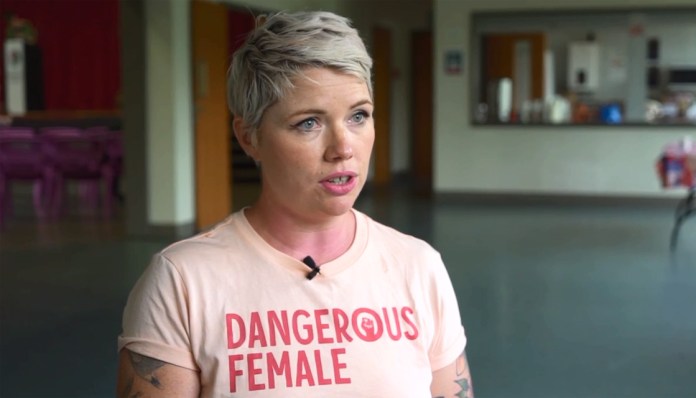 Clementine Ford is at it again, this time she doxxes a 14 year old boy. While I don’t condone what he said, we have to remember that he’s a 14 year old child and she’s an adult.

But it seems Clementine Ford likes to target children, as they are easy targets. We saw a perfect example of this when she bullied school boys after giving a talk at their school (Aquinas College in Melbourne).

She had originally posted his full name and photo, without blurring his face. However, it wasn’t until his mother begged her to take it down that she finally obliged. Under the post on Clementine Ford’s page, her feminist cronies wrote some pretty disturbing comments. One reads “vasectomies at puberty, microchip implants too“.

This boy will now have to suffer the consequences of her doxxing, well into his adult years. This could affect his prospects of gaining employment for example. But we all know this is exactly what Clementine Ford wants… it is her specialty in getting men fired or even boys expelled from school.

While this boy is on the right path in rejecting feminism, he needs to learn to be smarter about it. Attacking Clementine Ford with low brow insults only makes her richer. It is far more effective to expose what she does, so people can see the misandrist she really is.

In response to the incident, Clementine Ford stated:

‘The message came randomly out of the blue, I’ve never had any interaction with this person before in my life – which is true of most of them,’ she explained.

‘Then he talked about some other things which were really difficult to decipher.

‘He said “maybe the world would be better if you stopped being such an insecure b****”.

‘And then he sent a second message which said “also put a gun in your mouth”.

‘I probably would have just ignored the first message, because that’s part of a normal day.

‘But it was the “put a gun in your mouth” that made me feel pretty sick.’

She said that while teenagers can often speak in such violent terms, she was horrified by it and wanted to call out the behaviour and ‘set an example’.

‘What’s going on in the head of anyone who would say that to somebody?‘, she went on.

You have to love the hypocrisy here. She claims it made her feel pretty sick, yet apparently it’s perfectly okay for her to call for the genocide of men with statements such as “kill all men”. As for her comment “whats going on in the head of anyone who would say that to somebody?“. Yes indeed, what is going on indeed inside the head of a feminist who says to kill all men?

Clementine Ford is a hypocrite