Facebook have taken down the ‘blokes advice’ group which had over 200,000 members. It is believed that Facebook caved into pressure from feminists to have the group removed. An online petition by feminist hate group ‘The red heart campaign‘ received 15,000 signatures to have the group shut down.

Blokes advice managed to raise $26,000 for a children’s cancer ward at the Royal Brisbane Hospital. The red heart campaign mentioned that they will be “talking to the Royal Brisbane Hospital about this”. This could imply that they’ll be trying to stop the hospital accepting these donations. If so, this means the red heart campaign are more interested in man bashing than helping terminally ill children. 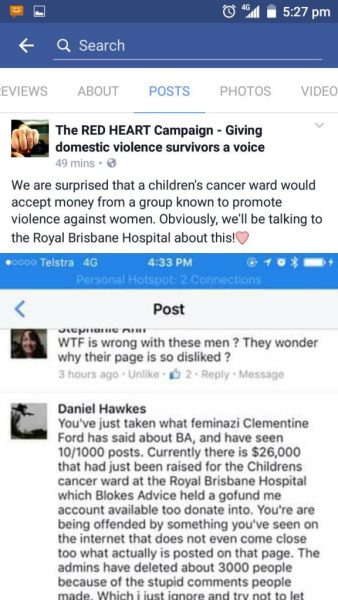 Meanwhile misandrist groups such as ‘bad girls advice’ still exist on Facebook, and are never likely to be removed. A member of this group boasts about all the penis pics they share – most likely without consent of the men involved. 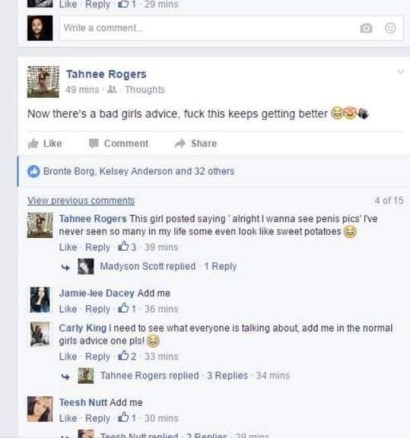 The removal of blokes advice came shortly after Milo Yiannopoulos was banned from twitter. Breitbart reported that after Milo was banned, twitter stock crashed by $1.6 billion. Will Facebook suffer a similar fate over removing blokes advice group? We can only hope. One must remember that Facebook and Twitter are running a business. If more people start leaving these social networks due to rampant censorship (in favour of feminists) then stakeholders will start to get nervous and back out. Stocks will crash, hopefully causing them to change their censorship policy. Thankfully, money talks louder than the voices of cry baby feminists.

Many Facebook users are already planning the creation of a new social media network which allows freedom of speech. Hopefully once it is created people will leave Facebook and Twitter in droves.