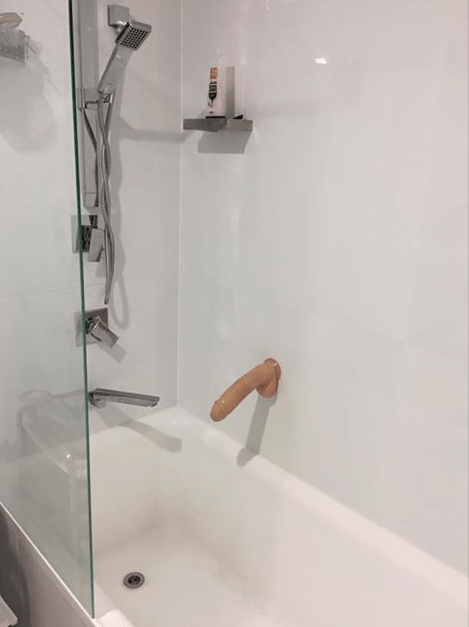 A Queensland tradie who shared a picture of a sex toy in a female client’s bathroom to a secret men’s Facebook group has been sacked — after the picture made its way to a rival, girls-only group, where the owner spotted it.

The same day, however, the picture was shared to the equally controversial Bad Girls Advice page.

“Sorry if this is basic, remove if it is!” the woman wrote. “But my plumber friend just sent me this with the caption, ‘As a plumber this is my greatest fear.’” 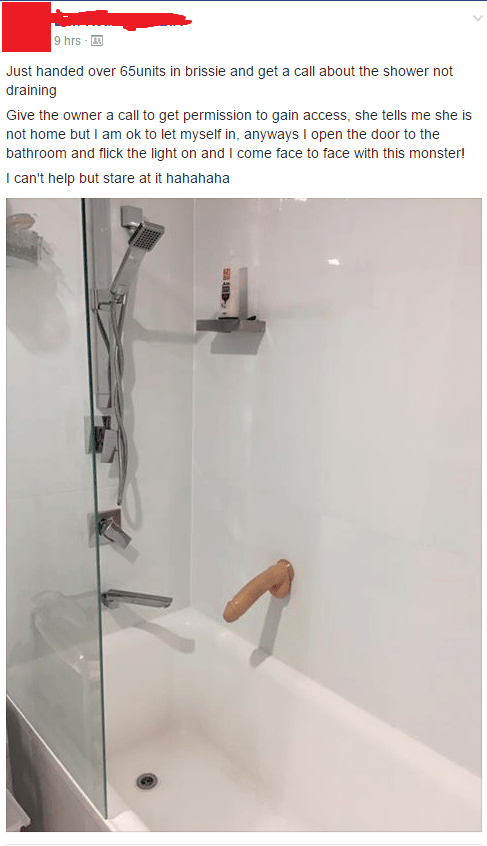 It quickly found its way to Bad Girls Advice.

Unfortunately for the tradie, the female client was part of Bad Girls Advice — which has more than 170,000 members — and she promptly contacted his boss to complain. The next day, a friend of the tradie hit out at the leaker.

A friend of the tradie shares the news.Source:Supplied

The original poster then confirmed he had been sacked, sharing his termination email. “It is with much regret that I must terminate your employment today,” his boss wrote.

“Your actions are condemned by me and have put my company in a vulnerable position. As discussed, I know now in hindsight, you regret your actions, but unfortunately they cannot be undone and have caused damage.

“Let me say, I admire your willingness to accept responsibility and accountability for your actions. You have been an integral part of the success of stage two and I commend you on your work in closing out the project. With only a couple of weeks to go, it would have been good for you to finish it completely.”

The tradie shared his termination letter.

The tradie stressed that he didn’t blame his boss, saying he “didn’t have much choice”.

“I had to pull it down as I was the foreman on the site and my boss had no other choice but to let me go, it was my fault not his,” he wrote. “Would I do it again probably not, but at the time I couldn’t dog the boys.

“[The] chick got wind of it he had a few emails with screen shots attached and as a director he has to show that he has taken action. I know there was no names mentioned or even pics of her but hey I guess that’s the risk we take posting s*** online.”

Members of the group were furious.

Members of the group, a previous version of which was shut down by Facebook last year after complaints about offensive content and posts demeaning women, were furious.

Another added: “Surely she can see the funny side of it? Not like he told the world who or where she was? Think she’s more embarrassed than anything and got the s****! Bet if it was a female tradie putting a pic of some bloke’s pocket p**** on the bag site this s*** wouldn’t be happening!”

Another wrote: “S*** outcome but the funny side is that the *** sponge had to tell plumbing company who she was. If I was boring out my hole with that thumper I’m pretty sure I wouldn’t want people to know. Bugger me dead you could put that thing out on hourly hire making tunnels for freeways!”

Others said he should seek legal advice. “Legally I don’t think they can do that,” one wrote. “Firstly that pic could have been from a 1000 bathrooms as there is no identifier to individual. No address posted and even in one town there could be 10-20 similar bathrooms. Talk to an employment lawyer.”

But others said he might have brought it on himself. “Playing devil’s advocate here, as much as it was funny, the bloke did cross a line taking photos of other people’s personal possessions inside a private residence,” one wrote.

“I’d be proper f***ing mad if some cheeky plumber took photos of my house and posted them on the internet. Poor bloke didn’t deserve the sack over it though.”

Many suggested either starting a GoFundMe or for someone else in the group to help. “Alright that sucks but instead of playing the blame game bull***, let’s help the bloke out, there has to be hundreds of plumbers on here that could help a brother out with work,” one wrote. “When those b****es go low we go high boys.”

Last year, a statement on the Blokes Advice website said the reasons why Facebook shut down the original page were “unclear”. “Blokes Advice is not illegal,” the statement said.

“Freedom of Speech is not a crime and we do not support anything the extremist groups say we do. This is a place for blokes to get to get together and be social and help each other, nothing more nothing less.”

Sarah Lock, workplace law principal at Shine Lawyers, said the case highlighted that nothing was truly private on social media. “Anything you post to social media, even if it is to a closed group, has the potential to be shared further and your employer may eventually see it,” she said.

“If your workplace has a social media policy, which outlines what the company sees as appropriate online activity, and if it is found that you have breached this policy, then you are at risk of losing your job.

“If a company doesn’t have an adequate social media policy then it would make it hard for the employer it to defend its position in an unfair dismissal application.”

Mark Latham: Hateful Clementine Ford for Australian of the year